Make Your Own Luck

I’ve been a professional emcee for 18 years.  Throughout those years I’ve won awards, had more fun than I can imagine and worked every type of event from three Super Bowls to nine Indy 500s, to Bike Weeks with Ford to SONY Gaming Competitions, Award Ceremonies, Game Shows,  Cheer events, Burger competitions, weddings and the list goes on and on, but I never imagined I’d become a race expert!

I grew up loving sports, watching sports, playing sports but I never got into racing other than 20 yard dashes with my big bro in the back yard.  Not because I didn’t like racing, my family just never got into it.  But then… it happened.  In 2005, I began working for NASCAR!  I knew nothing about NASCAR and knew my whole job would be interacting with race fans.  And if you’ve never been to a race, race fans are NUTS… in a great way!  They love their sport, their drivers, their machines, they love it all.  And if you love their sport, they love you too.  My good buddy Chris Krueger knew this and told me, “Just pick one driver at first and learn everything you can about them and their team.”  So, I picked Matt Kenseth.  Why Matty K?  Well, because not knowing anything about racing, Matty K drove for Ford, who I worked for as an Emcee, they were our sponsor and well, he drove the 17 machine!  That’s my Birthday… July 17 for anyone who wants to send gifts.

One thing you need to know about racing, it’s like a soap opera, yeah the sport is about bad ass machines but it’s also very much about the drivers, their rivals, friends, history, etc.  So, I learned all about Matty K and my racing education began!  Fast forward thirteen years and I’ve become a racing expert, if you will, having worked for NASCAR, I was the Host for the INDYCAR Fan Village for four years, rocked the mic for the Honda Fan Zone for two years, interviewed NHRA’s greats while working for Valvoline and now, I’m the Emcee for Acura during IMSA.   In fact, this week I’ll be rocking the mic for Acura during the Sahlen’s Six Hours of the Glen, the next stop in the IMSA WeatherTech Championship.  I worked my first IMSA race back in March during the Acura Sports Car Challenge at Mid Ohio.  It’s crazy, over the last thirteen years I’ve become a racing emcee and I love it.  Not only is the environment awesome but the fans are the best in all of sports!  They seriously become family.  I’ve laughed with, cried with, cheered with, had meals with, drinks with, long drives in convertibles with, received amazing gifts from, sent amazing gifts to and befriended so many.

I began my Emcee career in a place I never really knew existed, Shoe Carnival and eighteen years later I’m working in a sport I never really followed growing up… and loving every minute of it.  Don’t fear the unknown folks, it can be the best kept secret you’ll ever find… I mean look at the awesome folks pictured below… 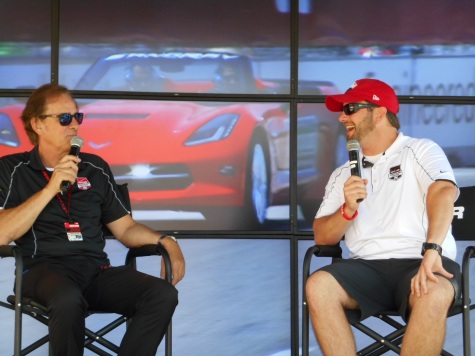